on January 21, 2019
Though I met up with a friend or a group for parts of some trips that I've taken recently, I visited a couple of places completely solo. Sometimes when I talk about traveling in general, even to Europe, people will mention the movie Taken that stars Liam Neeson. His daughter was abducted while traveling in Europe and he sets out to rescue her. When I mention traveling alone, I receive even more concerned, squinty-eyed reactions from people. This is because of horror stories in the news or like Taken (even though it is a fictional movie), traveling solo does not appeal to everyone, and also because I am a tiny girl who some people mistake for a 15 or 16 year old kid.
I received mixed reactions from fellow American travelers in Rome when people found out that I was there alone. A group of girls in their 20s talked to me as I headed toward the Forum of Augustus. They were shocked, but impressed to see an American girl on her own in a foreign country. However, I was afraid to admit to a couple of elderly women that I was alone. They seemed concerned, but avoided chastising me for it.

Despite the fact that nowadays more women are traveling whether alone or with female friends, I knew that my family and friends would think of a woman traveling alone as foolish, naïve, and dangerous. Thanks to my constructive Media and Popular Culture professor last semester, I delved into the reasons behind the dangerous perceptions of traveling alone for women. Through that research, I found differing representations of them in multiple forms of media. To keep university academia out of this blog, I won't add my entire research paper about how media represents women traveling alone into this post. Just the infographic that went along with it. 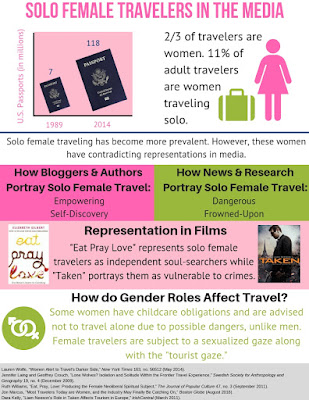 Though there is a widely-held belief that it is dangerous for a woman to travel alone, it's empowering to do so. And to me, it is not boring. Think about it like this: you get to see everything that YOU want to see. No compromises and no waiting around for other people each day. You get to meet other travelers in the same way as if you were with a group. I've met so many people, male and female, who greatly dislike being alone whether they're eating lunch or just hanging out at home. This is all the more reason to spend time traveling alone. Don't wait to do something until you have someone to do it with.

Overall, you get to step out of your comfort zone and surprise yourself with what you can do all on your own and with your own independence. In that way, traveling alone can make you feel more confident. From the overnight bus rides between countries to wandering around small lakeside towns in Italy, I always look back on my solo trips and think to myself, "I can't believe I did that." I would like for more people to have memories that make them think that as well. Picture Eat, Pray, Love instead of Taken. But when you do travel alone, bring a selfie stick because you won't have anyone to take photos of you (unless you want to risk giving your phone or camera to a stranger to take a photo of you).

For another testimony from a woman traveling alone, use this link:
https://matadornetwork.com/bnt/7-uncomfortable-truths-about-traveling-solo-as-a-woman/ 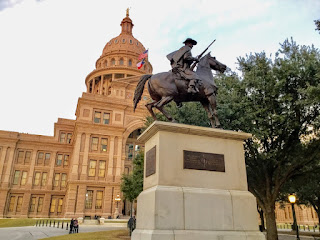