The People You Meet Along the Way 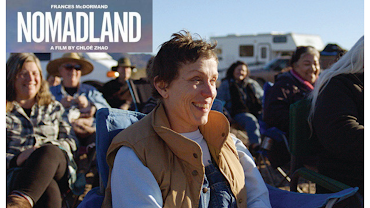 Upon watching Nomadland and then watching it win some of the biggest categories of the night at the Academy Awards, I started thinking back on how much people shape travel experiences. Meeting people seems to have become a bigger part of traveling thanks to tour companies and social media. The Instagram account Humans of New York is a prime example of bringing people to the forefront of major destinations worldwide. In Nomadland, the film's main character meets people throughout the film who all share their own stories and bits of wisdom whether she remains in contact with them long term or simply runs into them only while passing through. I thought back on past travels wherein I have met people who were interesting to say the least, but memorable all the same. Some were residents of each city and some were other travelers.

I owe a lot of my memorable encounters to hostels and Airbnbs. At the Check-In hostel in Berlin, I met a 20 something guy who studied abroad in Europe and came back a few years later to stay pretty much indefinitely. He looked like someone straight from Woodstock and was actually living at the hostel at the time while working on his own music videos. He would sit on his bunk with his laptop editing sound (using headphones) late into the night and thought about interviewing those passing through just like me and posting their stories on YouTube. I never found any of those interviews, but I hope he did go through with that idea. One morning at the same hostel, I saw one guy doing yoga and another doing a morning prayer. I can only imagine their stories.

I stayed in another hostel in Rome during May of 2018. Once she found out that I was an American, we overcame the language barrier to discuss what was happening in the US at the time. I had definitely been mentally preparing for such a conversation. She was shocked at the 2016 election outcome in the US, but told me that she voted for the Five Star Movement in the most recent Italian election. I had done my research. I knew of that political party. It was no different than the occurrence in the US. Hypocrisy knows no borders. It made me laugh internally, nevertheless.

In Paris, I opted for an Airbnb. It was located in a neighborhood at the very last stop of one of the Paris metro routes. Definitely not a swanky Parisian apartment, but with a direct connection to the center of the city. I was excited to meet a local and speak French, but I was greeted by two Chinese people. It was a testament to the contemporary demographics of Paris and its suburbs.

At the Prague airport waiting for a flight to Ireland, I overheard tales of what I'm assuming was a lads' vacay in Prague. One of the guys with an Irish accent talked about wondering how he is going to face his significant other once back home. Given Prague's heavy beer reputation that rivals that of Ireland - and the time that a few tipsy British vacationers talked to me and a few classmates on the Charles Bridge - again, I can only imagine what they got up to.

As Rome is one of the most visited cities in the world, I had more interactions with travelers than locals. I met a Utah girl visiting all over Italy with her grandma, who had been to Rome four times beforehand. I knew she was going to have knowledge of Rome over a couple of decades. They were exploring on foot to places I wanted to see as well and allowed me to tag along for a couple of hours since I was traveling solo. The grandma wanted to see a painting from a specific medieval artist. The quest took us to some gorgeous lesser known churches. I am still following the granddaughter on Instagram.

Interesting people have come my way on this side of the pond too. On my trip to Vegas, I met a group of friends from India who were shocked that I knew about their hometown. I told them about how India is near the top of my list of places to go, though I have no idea when I'll get there. A year prior, I overheard a couple speaking French in Venice, California. I spoke to them in French and found out that they were from Grenoble. I tried to say that I wanted to live in France someday, but accidently said that I had previously lived there. Oops. Those two meetings remined me that as much as I want to visit other countries, people from other countries want to visit the United States too.

There's a famous quote that has nearly becomes cliché that states, "It's not the destination. It's the journey." However, when focusing on the human element of both destinations and journeys, maybe it's the people you meet along the way that shape memories more than destinations and journeys. From glass blowers in a tiny town in northern Czechia to a local woman stereotypically repeating "Mamma mia" in Verona, even if you have loner tendencies like me, people still become important parts of all travels.

Five Things That I Wish I Had Known Before Visiting New York City: Transportation Tips

Five boroughs, eight ferry routes, 26 subway lines, and 325 bus routes all operate around the clock to keep The City That Never Sleeps in smooth operation. The Metropolitan Transportation Authority (MTA) covers all of these and has an incredibly accurate trip planner on their website that updates frequently with any delays or outages. While most Americans rarely use public transportation, every day in NYC 4.5 million people use the subway alone. The iconic yellow taxis are everywhere as well, along with Uber and Lyft services. But if you want to get by (much more) cheaply and like a local, public transportation is the way to go. It is part of a New Yorker's daily life and part of the whole experience for tourists. Embrace it! However, there are little things of which outsiders may not be aware. Here are 5 things that even my months of research did not teach me before arriving in The Big Apple. 1. Subway connections on Google Maps look like they are not in the same location but they