Five Things That I Wish I Had Known Before Visiting New York City: Transportation Tips

Five boroughs, eight ferry routes, 26 subway lines, and 325 bus routes all operate around the clock to keep The City That Never Sleeps in smooth operation. The Metropolitan Transportation Authority (MTA) covers all of these and has an incredibly accurate trip planner on their website that updates frequently with any delays or outages. While most Americans rarely use public transportation, every day in NYC 4.5 million people use the subway alone. The iconic yellow taxis are everywhere as well, along with Uber and Lyft services. But if you want to get by (much more) cheaply and like a local, public transportation is the way to go. It is part of a New Yorker's daily life and part of the whole experience for tourists. Embrace it! However, there are little things of which outsiders may not be aware. Here are 5 things that even my months of research did not teach me before arriving in The Big Apple.

1. Subway connections on Google Maps look like they are not in the same location but they are. If you are going from one subway line to another, you do not need to resurface to get to a connecting line. Take Canal St. in southern Manhattan, for example. More than 10 subway lines have a stop here. On Google Maps it looks like some lines are in separate locations along this street. Of course you still have to walk from one line stop to another, but all platforms are still underground and labeled.

2. MTA schedules are not the same 24/7. This is where the MTA website comes in handy. Some weekend and holiday schedules are different. Usually, the MTA has accommodations for services changes, such as shuttle buses that cover the same ground as the subway usually does. Line J is one of these, for example.

3. MTA cards are a must unless you want to carry lots of change. For buses and ferries, exact change is required and bills are not accepted, hence why an MTA card is easier. Credit or debit cards can only be used twice per day on MTA ticket purchases, which include bus, train, and subway tickets. MTA cards do not have this limit. These cards are reloadable and can be purchased or reloaded with cash, credit, or debit cards at subway ticket kiosks. This leads me to my next point... 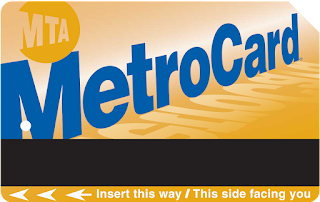 5. Know the general area of your destination. Each subway line, train, or ferry runs in 2 directions. To know which one to take, it is best to know the general area to which you are headed. For subways and trains, the platforms are usually labeled based on the general area of the subway's end point in either direction. One sign for a particular subway line could say "Downtown" and the other direction for that line might say "Brooklyn" for example. Inside each train, there is a list of stops that it will make. If you notice that your stop isn't listed, it is easy to get off at the next stop and pick the platform for the same line heading in the other direction.

New York City's public transportation is similar to other major cities around the world. Subway lines have connecting stops with other lines, each line has two end points, and you can go toward either endpoint at any of the line's stops. They are not dangerous and are less dirty than some assume. One bus, train, subway, or ferry ride only costs either $2.75 or $3.00 as compared to taxis that charge per mile and Ubers or Lyfts which charge based on demand. It is an amazing feat to run a city like New York, and the MTA does it well. It may not be perfect, but how could it be with a population density of 27,000 people per square mile?